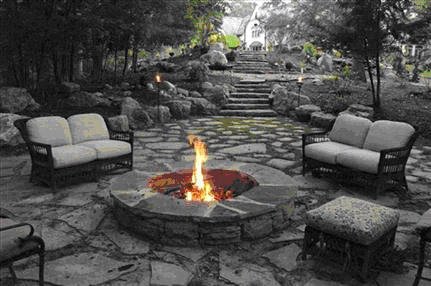 With soaring fountains, deluxe kitchens and fire pits, your backyard can be far more impressive than a simple patch of concrete and a stretch of grass where the kids can play.

Patios aren’t just patios these days. In building industry lingo, they’re “outdoor living spaces.” Now that many Americans are reluctant or unable to move as home prices plummet, contractors say homeowners’ focus has turned to sprucing up the backyard.

“People who otherwise might have moved are staying and doing projects like this,” said Dan Bawden, owner of Legal Eagle Contractors in Bellaire, Texas.

For well-heeled homeowners, that means fancy grills, pools, gazebos and kitchens. But there are plenty of ways to embark on a patio project even if you don’t have thousands to spend on Roman columns or a massive stone fireplace. While it’s not for every homeowner, experts say installing a new patio can be a feasible do-it-yourself project.

Whatever the budget, experts advise homeowners to examine their needs carefully before starting. Make sure you know who will use the patio — kids, grandparents, neighbors — and where you’re likely to put your chairs, tables and other furniture.

“Consider the outdoors part of the house, or an extension of the house,” advises Scott Mosby, president of Mosby Building Arts in St. Louis.

His company built a rounded concrete patio, a screened-in porch and a utility room for retiree Jean Leonhardt, 71, of Ballwin, Mo. She spent about $130,000 on the project, replacing a much smaller patio. She outfitted the patio with railings and a ramp so she can get around as she gets older. “What I really wanted was just a place to sit out and listen to the birds and watch the world go by,” she said. Now, she has that and more. Her backyard is so inviting that the neighborhood kids come by and play from time to time.

Among many homeowners, a popular trend these days is to install outdoor fireplaces and fire pits. They are natural spots where the whole family can gather at night.

“You have a group of teenagers that don’t say much during the week, you light a fire pit and all of a sudden they’re talking,” said Alan Hendy, vice president of Neal’s Design Remodel in Cincinnati.

Taking the idea a step further, remodeling contractor Michael Fast has been working on project in Tacoma, Wash. involving a waterfall with a natural gas line that would send flames dancing atop the water’s edge. “A lot of people want something that nobody else has,” he said. Still, it may wind up being cut out of the project, Fast said, because it’s probably too costly.

While you can certainly hire a contractor to design the flaming fountain of your dreams, the big home improvement chains sell more modest fire pits for less than $150. If money is tight, don’t be scared of doing a patio project yourself, advises Dean Marsico, a Massachusetts stone mason and co-host of “Rock Solid” and “Indoors Out” on the DIY Network. You can install a ten foot by 12-foot patio for $1,200 or less, Marisco said, compared with more than $3,000 if you get it professionally installed. “It’s a good work weekend, but it absolutely can be done,” Marisco said.

Doing so, however, takes planning. There are hundreds of products on the market, so here are some tips: Be careful to pick a design that goes with your house. Don’t pick something flashy and contemporary if your house is a century old. Also, if you’re planning to do the work yourself, stick with a rectangle or a square. Rounded edges, while more visually interesting, are also more complicated. When you dig out the space in your backyard for your patio, experts advise allowing it to slope slightly away from the house, to avoid any drainage problems. After measuring and setting up string tied to stakes to outline where the patio will go, dig six inches into the ground, putting down a four-inch to six-inch base of crushed stone and then an inch of coarse sand.

As for what materials to use, there are many options. Here’s a basic guide:

NATURAL STONES : Commonly used stones like limestone, bluestone, fieldstone and flagstone give your backyard that classy, natural look. But they are costly and labor-intensive to install. Depending on the kind of stone you want, it can cost anywhere from around $8 to $10 for material per square foot for material and about the same for installation. Or, if you’re not planning a full patio, they can be attractive stepping stones in your garden or on a walkway.

STAMPED CONCRETE : Concrete can be poured and then pressed to look like many varieties of brick or stone. It can even look like slate or cobblestones. Contractors can inject pigments into the surface to create a variety of colors. Chris Becker, owner of Becker Architectural Concrete, near St. Paul, Minn., says the process typically costs about $12 per square foot. “It’s a combination of a construction process and an art form,” he said.

WHITE CONCRETE : It provides a basic, not-too-flashy look at a low price, but can still crack over time, especially if a root grows underneath. It should cost around $8 per square foot, provided the installation isn’t too complicated.

BRICKS : Great for a traditional look, clay bricks cost around $5 to $6 per square foot, without installation.

PAVING STONES : Manufactured from concrete, they are available in a wide variety of shapes and colors and can be installed by the homeowner. They are less expensive than natural stones, selling for around $2.50 to $8 per square foot, without installation. Advocates say they’re a good choice because they can easily be pulled out and replaced if a repair is necessary, and because they absorb water well.

Traditional patio pavers were either red bricks or concrete pavers with regular shapes like rectangles and squares. But hundreds of more adventurous styles and colors are now on the market.