Fascinating Facts About The World Of Toilets

Did you know that there is a Japanese proverb that states that ”if a pregnant woman keeps her toilet clean she will give birth to a beautiful baby”? This means that if you live in Japan and have the misfortune of giving birth to a homely baby, your friends will jump to the conclusion that you keep a dirty bathroom.

A toilet is a necessary place to “visit” each day for every person on the planet and there is an amazing array of choices in the toilets from across the world. In a surprising number of countries the same crude, porcelain-lined hole in the ground that has been around for centuries is still the common choice. 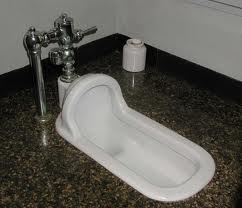 In more technologically advanced countries, however, there have been amazing changes in toileting technology. Many of these changes have come to pass – (no pun intended) – in order to reduce water usage and to provide for the varied needs of the “baby-boomers”.

As a remodeling contractor, with 33 years in the business, one major change that I have seen in toilet installations in the Houston area is that I am installing “comfort-height” toilets. These have a seat height of 17” or 18” high, compared to the typical toilet seat height being at 14” high. Taller models are surprisingly much more comfortable for adults to get on and off of, unless they are short in stature.  Unless the bathroom is going to be used by a small child or children, I am installing a comfort-height toilet in every bathroom remodel that I do.

I have also been installing more “wall-hung” toilets which allow for the toilet being placed at the most comfortable height for specific clients. It also has the advantage of leaving clear floor space underneath the bowl for easy maintenance and cleaning. 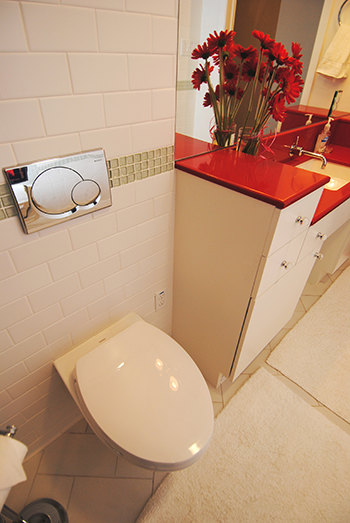 Growing in popularity are the “dual-flush” toilets which dispense a different amount of water depending on whether the toilet is being used for liquid or solid waste. These can save up to 40,000 gallons of water a year for a family of four. 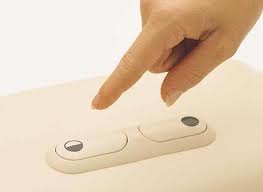 The most technological changes in toilets have occurred in Japan, the United States and in Europe. The Japanese are downright fascinated by toilets. They have scholarly National Toilet Symposiums where commode connoisseurs gather to ogle spectacular toilets on display. You can find 24 carat solid gold toilets, an antique toilet museum (Kiln Plaza” in Tokoname), and you can even join-in on the Celebration of Toilet Days – on November 10th of each year.

In Japan, one must switch to “toilet slippers” to venture into the bathroom, since it is considered “unclean”; then when finished, one switches back to your house slippers as you exit the bathroom. Public toilet slippers are placed outside the bath door at all public facilities and dormitories. Apparently the Japanese people are afraid of cooties on the bottom of the slippers, but not afraid of cooties on the inside of the slippers from strangers wearing them.

Even in highly technologically developed countries, there are interesting historical toilet facts. In the old days, for example, the Japanese used seaweed for toilet paper while early Americans used corn cobs (ouch!).

When Western toilets were first introduced in Japan, instructions had to be provided that showed boys standing and girls sitting down. Many Japanese were not sure how to use them and squatted while standing on top of the toilet seat and hovering over the bowl. More than half of the homes in Japan have toilets with a built in bidet-seats (a squirting water jet) and a blow dryer, so that little or no paper is necessary. Interestingly, many Japanese toilets have a small water-saving sink on the top of the tank that uses the water being stored for the next flush, so you don’t have to walk to a separate room to wash your hands. 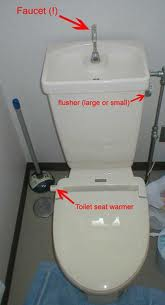 In the old days, human waste was collected and used for fertilizer. Excrement was considered so valuable that land-owners had the rights to it and not the renters that produced it. Renters did however; own the rights to their urine. Excrement was saved, stored in tanks and was classified into 5 grades according to its suitability for fertilizer. The waste of wealthy people was regarded best, because their diets were better. The lowest grade came from prisons. Farmers continued collecting human waste from cites in Japan until the 1930s. Some merchants made deals with the farmers to exchange the waste for eggplants and white radishes.

One of the most famous manufactures of toilet devises is called Toto. They make an amazing variety of “washlet” toilet seats that you can install on any existing American toilet, elongated or round.  In addition they spray warm water on your underside and blow you dry with warm air so there is no need for toilet paper. 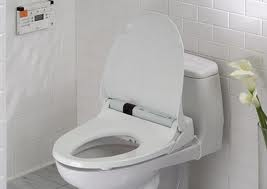 More expensive models can do amazing things and there are some shockingly sophisticated technologies in the works, which will be discussed below.

One idea that Toto developed that did not pan out was the female urinal, a cone-like device that rose from the floor. Several hundred were made in the 1950s and 1960s. One of the last remaining ones can be seen in Japan’s national stadium which was built for the 1964 Olympics. In Japan Toto addressed the problem that women sometimes waste large quantities of water by repeatedly flushing the toilet to cover-up “un-ladylike noises”. They have created new state of the art toilets with an electronic device called a “Sound Princess” which produces flushing sounds to hide any un-ladylike noises without wasting water. And a portable noise generator which some women carry in their purses and is also available for use in some public restrooms. The Japanese public currently spends over 100 million dollars annually on over-the-counter pills that are designed to prevent odors while using the toilet.

One happy American owner of a washlet told US News and World Report, “I shouldn’t say this, but sitting on that toilet is actually one of my favorite things of the day now.” According to a survey in 2005, 59% of the homes in Japan have high-tech toilets compared to 23% in 1995. This means that the percentages are higher than 59% in 2011.

There are a number of high-tech models currently on the market that have temperature controls for the water, deodorizers, heated seats and fans that break down odorous molecules, digital clocks to tell users how long they have been on the toilet, and a control panel that offers a variety of flush strengths along with a device that automatically puts the seat down when you are done. The fully configured Washlet is the “Lexus” of toiletry, and has enough hoses, buttons, remote controls and temperature and water pressure adjustments to “bowl over” the most avid gadget freak.

Matsushita and Toto are working on smart toilet technologies that measure “input and output” and send this information to health care services. This is particularly useful for older folks who live alone. There is a fast growing segment of the population, reaching the older senior age, just like there is here in the USA. These more sophisticated toilets talk to their users – actually talk to their users, take their weight and blood pressure, measure body fat, measure chemicals in the urine to determine glucose levels, kidney disease and future cancers. It would send the results, online to medical facilities. These more sophisticated toilets are being offered for $4,000. in new houses, built by “Daiwan” in Japan. Some new toilets have “ejector seat” contraptions that help elderly people and people with physical disabilities get off the seats.

Toto’s newest “Neonest Systems” have wall control panels, stereos, buttons to adjust water temperature and a choice of air purifications. There are also models that offer massages with gentle pulses of water and anticipate the approach of users with sensing devices that open the lid automatically so that you never have to touch it. Some send out “etiquette music” with sounds of running rivers and bird sounds, and that deploy special deodorizers that use activated oxygen to remove odors at the molecular level and release rose or cherry-blossom fragrances. Among those who have purchased these high-end toilets include the actor Will Smith and Madonna. You may never look at them the same again when you see them in the movies.

Other technologies include a new toilet made by Matsushita which is a self-cleaning toilet, costing between $2,500. and $4,000. Now that’s a Japanese Super Bowl.  It is made of a totally new glass material and is said to never need cleaning. Toto has also developed toilets that have tornado-like flush and a cleaning cycle that wipes away all the waste from the toilet. They also offer extra wide toilet seats, especially made for Sumo wrestlers.

If you have never used a bidet-like washlet that treats you like a high-end spa/car-wash, it may seem like a strange and uncomfortable idea. However, once you have experienced this new technology, it is hard to go back to the old porcelain throne that has become so familiar in our homes all these years.  I urge you to – “try it….you’ll like it!”  Are you OK? – you seem a little flushed!