Remodeling can be one of the most rewarding and exciting activities you’ll ever do at your home. But it can also be a stressful, emotional experience because of the mess, the noise, the costs, the disruption to your life. That’s why, at some point in the process, virtually every homeowner who’s made the decision to remodel thinks (or says out loud), “What have we done?”

We know this process is a burden on our customers that’s only made worse by not knowing what to expect. So to help prepare you (in a light-hearted way), Dan Bawden, Legal Eagle Contractors’ CEO, created this visual aid as a rough guide to the levels of bliss–or lack thereof–all the parties involved typically experience during the course of a major remodel.

As you’ll notice throughout, Children will remain pretty even-keeled the entire time (with a couple exceptions). Keep them as close to their routine as you can and maybe sprinkle in more “treats” than usual and they’ll be fine. As for the Family Dog, well, we’ll pick up with him near the end, when he reappears to eat the hors d’oeuvres that fall off the tray at the Last Door Knob party; he’ll be happy when all these strangers stop messing with his turf. 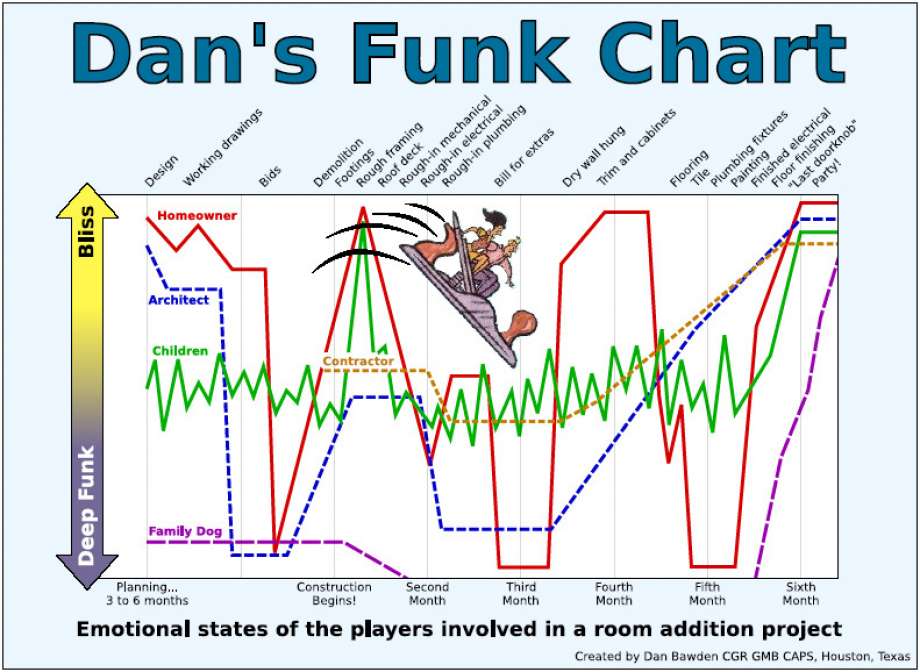 This stage can take as little as three or as much as six months, but regardless, the Homeowner and Architect are both riding high through the design process and working drawings. You both get to “see” how amazing your home will look when everything is done, and it’s impossible not to get excited about all the fun you’ll have with your new digs.

Then the bids arrive. Faced with the dollar figures of what a remodel costs, the Homeowner plummets into Deep Funk territory. The Architect was already there in anticipation of sharing the bids with you. Fortunately, though the emotional dropoff is steep, it’s short-lived. Both the Homeowner and Architect will quickly begin climbing out of the doldrums as construction begins.

As old construction is demolished, new footings are laid, and rough framing goes up, you’re back to Pure Bliss–things are really happening! They’re just not happening as quickly as you’d imagined, and as the somewhat boring tasks of drying-in the roof, installing insulation, running wires, and spraying for termites continue, Homeowner enthusiasm starts to wane again.

The Contractor is now part of the team, of course, but he is much more stable feelings-wise, because he knows this is all a marathon, not a sprint. With construction underway, the Architect’s joy has leveled off as he worries that everything goes according to (his) plan.

The Homeowner’s bliss bottoms out for now at the rough-in electrical level, but rebounds during rough-in plumbing. Now you begin to see where the new shower will go, or the new double-sink vanity, and you start to get happy again.

The Contractor and Architect are headed the other way, however, as they prepare to pass on the bill for the extras they’ve incurred in labor and materials that overran the estimate in the contract. When these costs hit the Homeowner, he instantly drops to the deepest depths of Deep Funk land. It’s going to take even more money?!

The Homeowner starts the third month at the low point, but all it takes to swing you right back up to elation is the sight of drywall being hung. The difference between mere framing and a drywall wall is stark, and gives you that jolt of a reminder of what all this is for: the newly remodeled room. Add some trim and cabinetry, and the final picture gets even clearer and the owner gets even giddier.

From here on, both Architect and Contractor have only steadily rising good vibes about the project, because they know the finish line is on the horizon.

It’s during the fourth month and into the fifth month that the Homeowner sinks into the final pit of funk. It was great to get the cabinets in, but now the floor is being torn up, and the end feels further away than ever. You get a little bump when the tile goes down, because that looks nice, but then the work moves to plumbing fixtures. You already got excited about the plumbing; seeing the actual toilet isn’t enough to save your mood.

“It will never be over. We’ll never have our house back. Yeah, they’re painting, but who cares anymore? I guess we can go look…Whoa! It looks incredible! And the electrical work and floors will be done in a couple days? We’re almost there! This was the best decision we ever made!”

Welcome back, Fido; the last door knob has been screwed in and it’s time to party. Everyone is on Cloud 9. The Contractor packs up and heads to a new work site, the Architect heads back to his office, and you and the Children step off the roller-coaster and start a new chapter of life in your newly improved home.